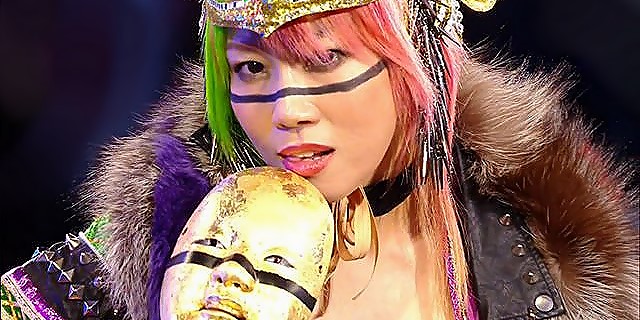 Asuka was asked about her short, simple promos and facial expressions, which she used to get her feelings and intent across to viewers and opponents, while using Japanese and English. Asuka described the promo work as just her showing off.

She continued when asked how she’s able to quickly go from heel antics like her green mist and babyface antics like happy dancing on top of the announce table. She said, “Don’t think about it. Just dance. I’ve asked myself where this dance came from.”

Asuka also discussed her former tag team partner Kairi Sane, who recently finished up with WWE and returned to Japan to be with her husband. Asuka said teaming with Sane was “so powerful and so helpful,” and commented on how their different styles provided the ingredients for great matches. She also expressed sadness at Sane being gone.

“I’m still looking for her backstage, where Kairi is,” Asuka said. “I’m just really sad at this moment.”

In an interesting note from the interview, Asuka addressed a recent social media tease, which came after the in-character anger she showed to Sane’s exit, on the possibility of using the darker, full face-pain and evil-clown-like persona she used in Japan. She revealed that WWE is open to her using that gimmick in the right situation.

Asuka teamed with Shayna Baszler on this week’s RAW, beating Banks and Bayley. She expressed interest in teaming with Baszler more often, and going for the WWE Women’s Tag Team Titles.

“I think we will be the tag-team champions,” she said. “I teamed up with Shayna Baszler and I felt very comfortable with her.”

Asuka also expressed interest in going up against WWE NXT Women’s Champion Io Shirai. Asuka, Shirai and Shirai’s older sister Mio once worked as a trio in Japan. Asuka believes the match will happen some day in WWE.

“I can’t wait for an opportunity with her,” she said on Shirai.