The match started on the ground floor of WWE HQ in Stamford, CT, and watched the Superstars fight through various areas of the building until they reached the roof. Several familiar faces made cameos during the match – Brother Love (Bruce Prichard), a bad version of Doink The Clown played by a mystery man, WWE Chief Brand Officer Stephanie McMahon, WWE Chairman Vince McMahon, RAW Executive Director Paul Heyman, and Producer John Laurinaitis.

Love appeared while using the bathroom during a brief segment with Rey Mysterio, Doink appeared from behind a chair during a brief segment with Daniel Bryan and Otis, Stephanie appeared during a segment that saw Dana Brooke enter the Money In the Bank conference room thinking it was the finish to the match, Heyman appeared during a segment where he was preparing to eat a table full of food until both groups of Superstars stopped in front of him to argue. Heyman tried to get them to stop yelling but Otis yelled out, “Food fight!” and then tossed a plate of food into Heyman’s face. This led to a food fight breaking out as Heyman looked on. Otis eventually entered another room where he found some pie to eat. Laurinaitis came riding by on an electric scooter, yelling out, “People Power!” Otis then smashed a pie in his face. A later segment saw AJ Styles and Bryan brawl into Vince’s office. Vince’s familiar music played and he yelled at them to leave. They left but came back in and fixed his chairs, closing the door behind them when they left. The segment ended with Vince putting on more hand sanitizer before going back to work.

There was also an interesting segment earlier in the brawl where AJ went looking for Mysterio, and opened up a door to a room for The Undertaker, which had his signature colors, music and casket. AJ had flashbacks to the Boneyard Match and was then kicked into the room by Aleister Black. Another interesting moment came near the end of the match where they made it look like King Baron Corbin kicked Mysterio and Black from the roof to the floor.

Below are a few shots from tonight’s cameo appearances during the Money In the Bank Ladder Match:

Foiled by the #MITB conference room!@StephMcMahon just broke it to @DanaBrookeWWE that the REAL contract is on the roof. pic.twitter.com/JFiph4poJA

Also, John Laurinaitis appearing after so long to only get a pie in the face?

I will never forgive his heel run as General manager. #WWE #MITB pic.twitter.com/OTbjoCa9PQ

BEST CAMEO OF ALL TIME! #MITB

Is that Doink The Clown? #MITB pic.twitter.com/BE3g3KiIL9 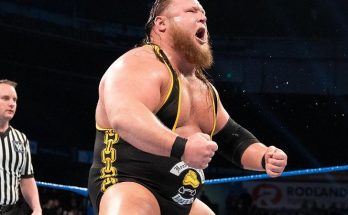