Paige was interviewed by Inside The Ropes where she talked about the possibility of one day returning to the ring.

“I think it is always a possibility one day, you can never say never,” Paige said. “It’s not going to be any time soon. That’s mostly all I can say about it, it’s really hard because I just had a neck surgery in August. My neck is just getting healthier quicker the second time around which is crazy, I feel absolutely fantastic. So, we’ll see where it goes.”

Paige also discussed the emotion going into her first WrestleMania and the idea of her being a WWE Diva based on the previous look of women who worked for the company.

“It gives me chills thinking about it,” Paige said. “I come from a little city of Norwich where not a lot of people have come out of there and been a success. It felt really wild to have that and then go to WWE where you dream of being but you never thought you would be because you’re not the typical diva back then. I didn’t look like any of those girls. All those girls were so beautiful, you had your Kelly Kelly’s and they were just so gorgeous and then you had me. This scruffy little pale goth who comes in with piercings, who doesn’t even know how to brush her hair. But apparently people like it, they liked it.

“But yeah, to get that WrestleMania moment was wonderful. It was insane, it’s still surreal when I think back. I always forget the stuff that I had done, and then when I think about it I’m like, ‘Damn I did some things, that’s really cool’.” 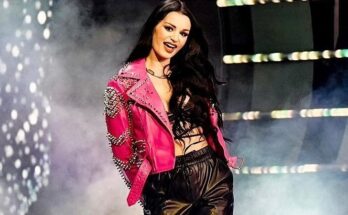