As noted, WWE has officially announced WrestleMania 37 for Inglewood, California next year on March 28.

The Miz took to Instagram this afternoon and said he will quit if he doesn’t headline the show in 2021. He made the remarks in the caption of a fan-made WrestleMania 37 graphic, also adding props to the creator.

He wrote, “Wrestlemania is going Hollywood next year. If I don’t Main Event…I quit. #Wrestlemania37 #MiztleMania”

Ziggler and The Miz often go back & forth on social media and both are known to mess around with fans, and each other, on the platforms. 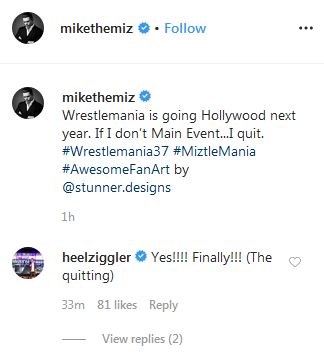 View this post on Instagram
Wrestlemania is going Hollywood next year. If I don’t Main Event…I quit. #Wrestlemania37 #MiztleMania #AwesomeFanArt by @stunner.designs
A post shared by Mike “The Miz” Mizanin (@mikethemiz) on Feb 11, 2020 at 3:07pm PST