During an Impact media call earlier today, Tessa Blanchard was asked about recent accusations of racism and bullying. Once again, she flat-out denied ever using a racial slur because it’s not in her heart.

“It was a very emotional weekend filled with highs and lows. I chose to step away from social media for a little bit because of all of the things that were going on. With everything that went on, not everyone’s gonna like me. Not everyone’s gonna agree with what I choose to do in my life. I’ve made mistakes but one thing I will say is that I’ve never used a racial slur of any kind. It’s not in my heart. It’s not something that I’ve done and it’s not something that I will do. It’s just not true,” stated Blanchard.

She added that people can make accusations on social media and others will jump on the bandwagon and go with it. She feels it was very unfortunate that some people would say those things about her.

“I know who I am – and people online – that’s the world we live in with social media. I’ve faced obstacles that have enabled me to persevere and become the woman and athlete I am today. This is just another stone in that step,” said Blanchard.

Blanchard was victorious in her Hard to Kill match with Sami Callihan and she was asked if the controversy affected her going into that match.

“That weekend is something that I’m gonna remember for a while. It’s a moment, match and event that I prepared for mentally and physically for months and months. There was already a lot of emotion that goes into it. The day before I was kinda hit pretty hard. I chose to step away from social media and live in the real world,” recalled Blanchard.

“To see your coworkers and peers say things that are not true about you, it did hit me pretty hard. I have extreme mental strength and with my family and little sisters to be there in the front row, it was special for me. I knew that everything that I had been through, I would have to use it as fuel almost to go out there and perform to the best of my ability…

“I can handle almost anything. Not everyone is gonna like you and I’m gonna build my own legacy based on my work ethic and not trying to win some popularity contest.”

“I’m so proud of what Impact has done through intergender wrestling and what they’ve allowed me to do. I’ve been put in a position where I’ve become the first woman to be Impact World Champion. I’m so thankful to the people that came before me honestly. I always reflect to Chyna because she was an inspiration of mine. She’s kind of a pioneer for what we’re trying to accomplish now but in a different way,” Blanchard said.

She added that she trained with guys while coming up and messed up many times but learned from those experiences.

“All of it was to get to where we are today. If I’m able to do what I do and become great, and anyone else is able to look at me and become great at whatever they want to do, that is the goal,” said Blanchard.

With both the controversy and the historic title win happening so closely together, Blanchard was asked how all of it made her grow as a person.

“This is not a business for the timid, meek or too thin skinned. I’ve been tested in this journey and one thing that my dad always tells me is that I graduated from the school of hard knocks,” said Blanchard. “I’ve given some and I’ve taken some. But one thing I’ve done is that I’ve never quit. During this whole journey over the past six years of my career, I’ve grown a lot as a person. I’m not the same person I was six years ago. I’m not the same person I was three years ago or last year. You grow and experience life. You take those experiences – your wins and losses – and you use them as fuel to become the best version of yourself possible.”

She says that she has learned to show respect to people who don’t deserve it because it speaks higher of herself. She also wants to be the best Tessa Blanchard possible so others can do the same for themselves.

“Nobody can kill your dream. Every day when you wake up the world is gonna ask you who you are…You’ve got to have the mental strength to know who you are,” stated Blanchard. 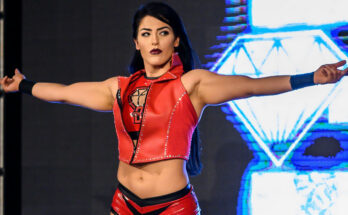