Rhea Ripley recently spoke with Gary Cassidy of Sportskeeda and was asked about Bianca Belair possibly being added to Ripley’s title defense against Charlotte Flair at WrestleMania 36. Ripley said she’d be all for the change.

As we’ve noted, Ripley retained her title over Belair at Sunday’s “Takeover: Portland” event and then Triple H indicated in a post-show Q&A that Belair wasn’t done with the Flair vs. Ripley feud, and that everything would turn out to be interesting for all three competitors. It didn’t sound like Belair will be added to the match at WrestleMania 36 to make it a Triple Threat, but it was implied that Belair will also receive a push coming out of the feud. Ripley said Belair does deserve the potential spot on The Grandest Stage of Them All.

“If they add Bianca Belair to it, I honestly don’t mind,” Ripley said. “I love fighting Bianca, and if she got put into the match, I’d be all for it. I’m not going to argue about it and say that she doesn’t deserve it, because she does deserve it. She deserves her WrestleMania moment and, if she gets added to it, I’m not going to complain.”

Triple H also indicated in another post-Takeover Q&A that the Flair vs. Ripley match may have been an idea from Vince McMahon, and that Vince does keep up with the women’s division storylines across all three brands. Ripley reacted to Vince being behind the match, and said it’s insane to think she has the support of WWE higher-ups. She also mentioned RAW Executive Director Paul Heyman believing in her.

“It’s insane to think that all the higher-ups think so highly of me,” Ripley said. “Especially coming from Adelaide, Australia to now being a part of WWE and having people like Triple H – who was the reason I started wrestling – to have him and Vince McMahon, Paul Heyman actually enjoy what I’m doing and believe in me – it’s a wonderful feeling, and I don’t know how to put it into words.

“It just makes me feel very special and proud of how far I’ve come in this business – and how much work, time and effort, blood, sweat and tears I’ve put into this.”

“It’s interesting! Actually, I thought it was pretty cool,” Ripley said, laughing. “Shayna is a badass and for her to go out there and bite Becky Lynch – I love that sort of stuff! I was very excited to see it. I can’t lie about that at all, I thought it was cool!” 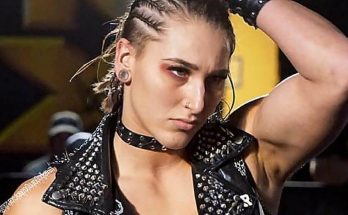 Rhea Ripley Shares Her Thoughts On The Wednesday Night Wars