Joe Galli and Stu Bennett welcome us to another episode of Powerrr from Atlanta. They shoot us over to Dave Marquez at the interview desk.

Tim Storm comes out to a huge ovation. He’s asked what’s on his mind. “Obviously last week didn’t go the way I planned. As a competitor you go out there and give your heart and soul… Tom Latimer is a hell of a competitor.” He calls the Mama Storm actor segment from the last couple weeks ridiculous. “The whole Strictly Business… I respect them… I understand what they are. I’ve got my own path to walk. We’re gonna get this done.” This bring out Thomas Latimer. “Shut your mouth Tim. I’ve already kicked your ass once. The fact that Mama Storm came out has nothing to do with the fact that you lost. The fact that you keep driving a wedge between me and Nick for the Ten Pounds of Gold… ” Latimer hesitates. “If it ever comes to that… may be the best man win.” Latimer ends the segment by saying that Strictly Business is done with Storm. He leaves.

Danny Deals comes out next. He apologizes for the Mama Storm bit that he’s been putting on. He says he’s done it to help get Storm back into the win column, and offers him a secret tag team partner to help him get some gold. “Where’s the deal where I get my hands on you?” asks Storm. Deals says that Storm has two options, one involving a hellfire if he decides not to take his opportunity. Storm threatens to kick down both doors and strangle Deals. Deals counter offers. He says that Storm will face his mystery tag partner… if he wins… Storm will help him get a contract. It’s former NWA heavyweight champion Jax Dane. He and Storm butt heads in a tense stand off. Segment ends.

Commercial for Man Camp with Nikita Koloff and Lex Luger.

Back from break… Matt Cross is with Dave Marquez. He says it feels good to be in the NWA. “When I think of this promotion… I think of three things: Mystery, heart, and spirit… and I have all three.” He says like the legends of the past he’s made a name for himself around the world, but now he wants to do it in the United States. “We’re not afraid of a word here… and that’s wrestling. In that ring I can live forever.” He gets into the ring. Zicky Dice is out next, followed by NWA TV champion Ricky Starks. Commentary confirms this is a non-title affair.

Starks chases Dice out of the ring. Cross and Starks tie up. Headlock… Cross bounces Starks off the ropes… Dice pulls Starks out. They brawl. Dice whips him into the post, then plays to the audience. Cross looks on from the ring. He takes out both men with a suicide dive. Back in the ring Starks rolls up Cross for a two count. Dice gets knocked into the front row. Starks and Cross take each other out with lariats. Dice tries to steal a victory with quick pins over both men. He splashes Cross in the corner. Starks and Cross temporarily align to double back body drop Dice. Cross hits Starks with a cutter out of nowhere. He goes for the shooting star… it lands. Dice throws Cross to the outside and pins Starks! it’s over!

Commentary wonders if this means Dice will receive another Television title opportunity in the future. Advertisement for NWA merchandise, with a special on an NWA fanny pack.

A new edition of the May Valentine diary. She says that one of the greatest things about being involved in professional wrestling is that she’s made so many amazing friends. She commends the love of her life, Strictly Business’ Royce Isaacs, for defeating the Rock ‘N’ Roll Express on a recent episode of Powerrr. She shares some new makeup tips. Camera pans out and shows that she’s been hanging out with Sal Rinauro.

Joe Galli is at the interview desk. The NWA National champion Aron Stevens joins him. Galli calls out Stevens for running out on his title defenses. Stevens gets a back and forth “Yes” and “No” chant with the crowd. Stevens says that neither Scott Steiner nor Trevor Murdoch could take the title away from him. Question Mark comes out for his matchup with Murdoch.

Murdoch levels Mark with huge right hands and a trio of lariats. Hard Irish-whip… Mark moves and goes for the spike… Murdoch moves… Mark hurts his hand! Murdoch quickly climbs… top rope bulldog connects. This one is over quick.

As soon as the match is over Stevens attacks Murdoch. He smashes Murdoch’s face off the turnbuckles. Question Mark recovers and starts stomping Murdoch down while Stevens lays into him with repeated elbows.

After a quick break… Sean Mooney is at the interview desk. He brings out the world champion Nick Aldis. Lots of boos from the studio crowd. Mooney asks him what’s next for him and Marty Scurll. Aldis says he defeated Flop (Flip) Gordon at Hard Times, then reminds the NWA fans that he and partner Royce Isaacs defeated the Rock ‘N’ Roll Express. “Everybody knows who is pulling the wagon and who is driving the NWA forward. It’s not trickle-down economics… it’s NICKle-down economics.” Aldis reveals that Marty Scurll is backstage, and says that he’ll give him a chance to back out of his deal.

Scurll comes out. Studio goes absolutely nuts for him. “Let’s get one thing straight Nick… I’m not backing out of anything. Let’s do away with the talking… let’s do this right here and right now.” Scurll pulls off his jacket and gets in the ring challenging Aldis to a fight. Before Aldis even moves… Royce Isaacs and Thomas Latimer come out. Aldis keeps asking… “Are you sure you want to do this?” Scurll refuses to stand down. Aldis removes his jacket and his watch.

BRODY KING is here! He and Scurll go after the Wildcards and fight them off. Security and officials come out and try to separate them. Loud “NWA” chants from the fans. Segment fades to black.

Eddie Kingston joins Dave Marquez at the interview desk. Kingston is taping his hands and says that he’s ready to bust some people up. He says that since the Bouncers took care of the Dawsons… it comes down to me and you. “I dare you to come out here right now. I’m pulling out your punk card Pope.” He jokes that Pope probably called the cops because he’s a snitch. This brings out Pope. “Eddie you are not quite understanding. You seem to forget who is standing before you.” He lists of his accolades. “The things that I’ve done to put you back on track are quite simple. What Pope wants… Pope gets.” The Bouncers come out to stand next to Kingston. Pope says that he got some beer. The Bouncers attack Kingston! They beat him down and deliver a spinebuster/leg drop combo Fans are livid. Pope screams from the sidelines… “you do not cross Pope.”

A vignette of Thunder Rosa and Melina’s relationship. Rosa says that winning the NWA women’s championship was the best moment of her career. Melina takes credit for Rosa’s success. “Because of me champions are made. Everytime they cheer for Rosa… they need to know that I made that happen.”

Sean Mooney announces that the Rock ‘N’ Roll Express are the first tag team announced for the Crockett Cup tournament. He also confirms two title matches for next week. Zicky Dice will battle Ricky Starks for the NWA Television championship, and the Bouncers will battle James Storm and Eli Drake for the NWA tag team championship.

Thunder Rosa versus Melina for the NWA Women’s Championship

Melina is trying to convince Rosa to lay down for her. Rosa refuses but Melina gets up in her face. Rosa shoves her off and tells her to bring it on. Melina angrily rolls outside of the ring and heads towards the building’s exit. Fans boo heavily. She gets herself counted out.

Melina still shouts threats at Rosa as she exits. Allysin Kay cuts Melina off and tells her to get in the ring. Kay rocks her with a forearm and starts to beat her down. Kamille comes out of nowhere and spears Kay! Rosa watches on, then has a stare down with Kamille. Fans chant loud for Rosa. She leaves the ring smiling. 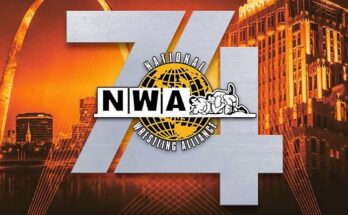