As noted, The Bella Twins will be returning to WWE SmackDown during Friday’s episode on FOX. They will be on “A Moment of Bliss” with Alexa Bliss.

It looks like WWE has pulled Nikki Cross from the segment.

The original WWE website announcement noted that The Bellas will be in the segment with both Bliss and Cross. The accompanying promotional graphic also featured both Cross and Bliss with The Bella Twins.

WWE made a change earlier today, removing Cross from the graphic and editing her name out of the announcement. There’s no word yet on why the change was made, or if Cross will be appearing on Friday’s SmackDown.

There’s also no word yet on why Nikki Bella and Brie Bella are returning to TV this week, but are rumored to be inducted into the WWE Hall of Fame during WrestleMania 36 weekend in April. The sisters announced in late January that they are pregnant, and due within 2 weeks of each other.

The Bella Twins are back this Friday night on SmackDown when they return for “A Moment of Bliss” with Alexa Bliss!

The former Divas Champions shared last month that they are both pregnant — Brie with her second child with SmackDown Superstar Daniel Bryan and Nikki with her first with fiancé Artem Chigvintsev. What will Nikki & Brie have to say about expecting, and might Little Miss Bliss discover any other juicy news?

Tune in to see The Bellas return to SmackDown, this Friday night on FOX at 8/7 C! 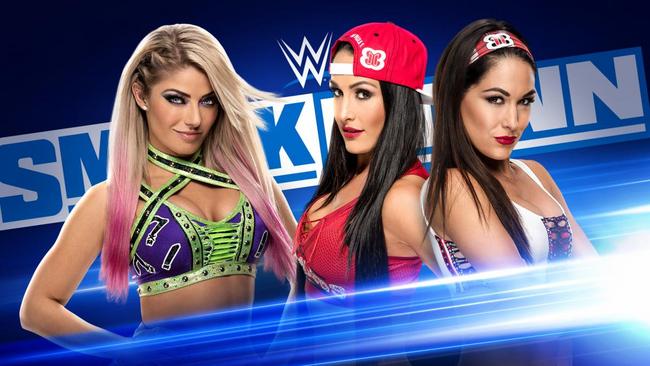 Nikki On If The Bellas Will Be At WrestleMania – WWE HOF