After the buzz generated by the NXT Brand at Survivor Series, the WWE obviously realized the appeal that the black and gold brand brings to the table.

WWE is apparently planning for NXT to get a big spotlight next year, as WrestleVotes has a very interesting piece of information to include about WWE’s WrestleMania 36 plans.

Heard from a well placed source, as of now, NXT will have a role at WrestleMania. Not talking about TakeOver, but on the actual Mania card. No details as to who or what, but an NXT presence will be felt at Raymond James Stadium.

To fuel speculation some more, SkyBet released their ealry betting odds for the 2020 WWE Royal Rumble and an NXT Superstar is currently the odds-on favorite to win the match.

According to Skybet, Velveteen Dream is currently the most likely to win the 2020 Men’s Royal Rumble match at 7/1 odds. That is pretty good, but he’s followed closely by Kevin Owens with 8/1 odds.

Adam Cole is in the #3 spot and shares the same 10/1 odds as Seth Rollins, Big E, and Finn Balor. You can check out the list below, but it’s very interesting that Velveteen Dream is on the top spot. You’ll also notice that Tommaso Ciampa, Rey Mysterio, Ricochet, and Aleister Black are all at 12/1 odds.

Dream hasn’t been seen on NXT television for quite a while. It was reported that he’s dealing with nagging injuries. Perhaps Vince McMahon has something pretty epic in store for the former NXT North American Champion.

Speaking of the Royal Rumble, it was also noted by Bryan Alvarez that the current plan for the 30-man and 30-woman matches is for there to be 10 RAW Superstars, 10 SmackDown Superstars, and 10 NXT Superstars in each.

Heard from a well placed source, as of now, NXT will have a role at WrestleMania. Not talking about TakeOver, but on the actual Mania card. No details as to who or what, but an NXT presence will be felt at Raymond James Stadium. 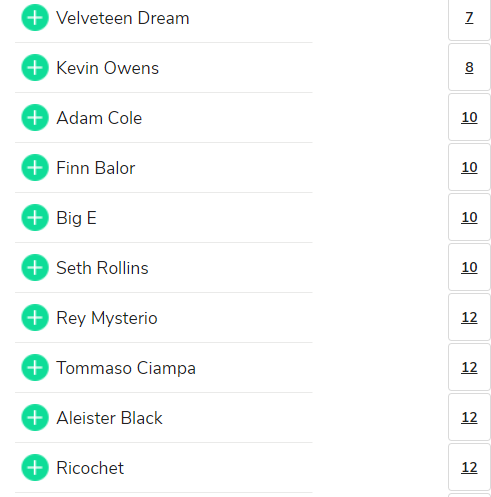