The current WWE RAW Tag Team Champions, The Viking Raiders were the latest guests the After The Bell podcast hosted by Corey Graves.

When the tag team debuted on NXT, in January 2018, they were known as War Raiders and claimed the NXT Tag Team Championships. However, their debut on the main roster back in April, saw the tag team undergo a name change to The Viking Experience – something which the tag team were dubious about.

A week after their debut, The Viking Experience changed its name to The Viking Raiders, something which the tag team was happy about.

“Before the name happened, the process of us getting there on Monday is a story into itself,” Erik said. “We were at the Performance Center with NXT and we had that weekend off. So I asked coach Bloom and the other coaches if I was able to visit Sarah’s [Logan] family [the inlaws] on the weekend. They said I was ok, so I flew from Cincinnati on Friday morning and I started getting messages on Facebook because I’m in the air not receiving text messages, from [at that point] Hanson [Ivar] asking if I was getting text messages about going to RAW on Monday. He said we were going up [to the main roster], and the first thing I asked was ‘are you f—ing with me?’ Anybody who knows him at all knows everything is a joke.

“I landed and I met Sarah and her parents at baggage claim and I told them about the messages. I said ‘bad news is I got to fly home tomorrow, good news is I’m going to RAW on Monday’. I didn’t have my wrestling gear with me because this was just a family vacation. I flew back to Orlando on Saturday, Ivar and I flew out on Sunday to get there for Monday and our plane got delayed. We got stuck overnight in Raleigh and we had to get our bags off the plane because they had all of our wrestling gear.

“Then WWE is scrambling to find us flights to get us into Montreal on time. They cant find two tickets on the same flight. So they route me through JFK and him through La Guardia. I landed at like 2.30pm but Ivor got stuck in La Guardia and didn’t land until 4.30 almost 5pm. We’re supposed to be at TV by 2pm. I landed after call time, he landed three or four hours after it. We’re stressed and I’m standing backstage when he texts saying he’s landed. I spoke to one of the production guys and he went ‘oh good, Vince [McMahon] was holding the writing meeting to know you were going to be here because you’re debuting. He re-wrote the show in case we weren’t there.’ But once he knew they started writing it with us there.”

With the pair now landed Erik starts to reveal the moment that he and Ivar found out that they would be known as The Viking Experience. Erik explains that their new individual names of Rowe and Hanson had already been slated to change to Erik and Ivar to sound more Viking-esque.

“Then we’re ringside, Ivar comes out, a graphic comes on the screen and there’s a cartoon Viking guy and it says Viking Experience,” Erik explained. “At first it said Berzerkers, then we were War Raiders and then Viking Experience, we watched the screen change to this and we looked at Hunter [Triple H] and said ‘are they messing with us?’ He just shook his head and told us to ‘go see Vince’. We went and spoke to Vince, at this point because it’s so late in the day we weren’t even going to approach the subject of Ivar and Erik – we needed to tackle the Viking Experience name.

“We knew at this point we weren’t going to be Hanson and Rowe. The primary focus was The Viking Experience. We caught Vince as he was going somewhere else and we pleaded our case about the name. It sounded like a Disney name and there were 10 names we gave him. The last one we gave him was Viking Raiders and he kind of paused on that one. He said they would introduce us as Viking Experience and if they didn’t feel it they would rename us to something else.

“But he also put over how much he loves the TV show Vikings and he loves Vikings in general and mentioning our wrestling gear, our armor and Viking details from history. So we felt confident that he liked us and our work – we were happy to hopefully in the weeks to come to get that tag team name changed.

During the episode, Erik went into detail about how people address him by that name, but he doesn’t recognize that they’re talking to him.

“It’s weird because people call me Erik, but I literally don’t understand they’re talking to me,” Erik said. “I walk right past them. Devon [Dudley] only calls me Erik which is weird because I’ve known him for years. But he will only call me Erik now. He’ll say ‘Erik, Erik, Erik’ and I just walk straight past him. He’s like throwing things at me and is like ‘Erik!’, and I’m like ‘oh, that’s me, sorry.'”

Viking Raiders’ Erik Out Of Action With A Foot Injury 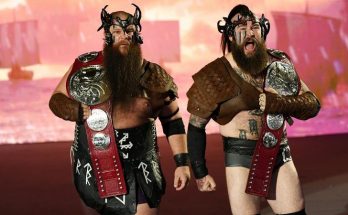