Roman Reigns‘ mistery attacker strikes back as someone tried to hit Roman with a car during RAW.

Samoa Joe went to the ring to call out Reigns because Joe was upset at the people who accused him of being behind the incident from last week on SmackDown Live.

Joe went out to the parking lot to meet Reigns as he drove in. Reigns got out of the car but rushed back in as another car sped in his direction. The car crashed into the car that Reigns was driving.

After the break, Joe and Triple H could be seen showing concern for Reigns so this might be Joe’s babyface turn.

The mystery of who is trying to kill Reigns will likely be solved tomorrow night on SmackDown Live, however WWE dropped a big clue on who is behind the attacks. If you looked closely during the Roman Reigns first video recap that aired during the first hour of Raw of the forklift accident from last week, Erick Rowan could be seen briefly with a black hoodie walking away as people tried to help Reigns.

Of course, Rowan’s presence would likely mean that Daniel Bryan is not too far behind… Check out Rowan (wearing all black) on the top right hand side of the photo below. 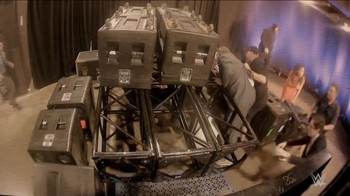