The man behind the gimmick, Austin Matelson, attended CSUN and received two degrees – a bachelor’s degree and a master’s degree in medieval history.

Matelson noted that he fell into a depression after his two-year run with WWE NXT ended in 2014. He had been working in WWE developmental as Judas Devlin, but was released after a severe spinal injury. Matelson blamed the released on a combination of circumstances – being still green, his independent nature, creative differences, and the injury.

After pursuing physical therapy and personal training to get his health back, Matelson contacted a Big Brother producer and they added him to the cast of the 17th season because they liked his “wrestler with a master’s degree” story. Matelson continued healing after the show and that’s when he resumed his pro wrestling career. He went to work for Lucha Underground and was assigned a character named Vibora, who wore a snake mask. Fans in the crowd chanted “Luchasaurus!” at him and the gimmick was born after Johnny Impact encouraged him to run with it.

Matelson is now working for AEW and is signed to a contract. He made his debut in the Casino Battle Royale on the Double Or Nothing “Buy In” pre-show last month, entering at #19 and picking up 4 eliminations. He was tossed by the winner, “Hangman” Adam Page.

“It’s all connected,” Matelson said of CSUN and his pro wrestling career. “I learned a different way of approaching a topic and an argument [and found] new ways of using my brain that I didn’t have before [studying] history. We learn how to write history, how to interpret things without truth. And wrestling is the ultimate thing that has no truth because it’s performance, and it’s half-pretending and half-real. There’s a lot of analyzing of the character you’re doing — how to perform in front of a crowd and get them to react to things a certain way.

“What you’re doing is almost telling a story like a historian tells a story,” he continued. “There’s a lot of correlation in the way you can approach it from that analytical point of view.”

Matelson revealed that he fell in love with pro wrestling as a 7 year old kid watching WWE Hall of Famer The Ultimate Warrior on TV. Matelson said The Warrior embodied his mythological heroes. That’s also when he wanted to become a pro wrestler.

“That was it. The moment I saw the Ultimate Warrior I was like, ‘This is Conan the Barbarian wrestling,'” he said. 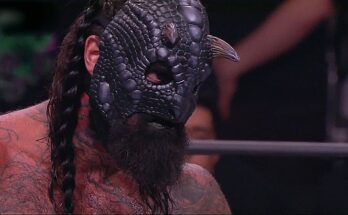