It was recently reported that WWE moved Andrade and Zelina Vega back to SmackDown from RAW, in part, at the request of Fox officials as they prepare for the blue brand to join the network in October on Friday nights. The report noted that Fox apparently felt like SmackDown lacked any major Latino Superstars coming out of the 2019 WWE Superstar Shakeup with Rey Mysterio and Andrade being moved to the red brand. Fox has plans to feature WWE’s Latino Superstars on their Spanish language channel, Fox Deportes.

It was also reported that many people within WWE had a negative reaction to Charlotte Flair and Andrade being split up as their relationship is reportedly getting serious. WWE wanted to make an effort to keep many of the couples together in the Shakeup, which meant Aleister Black also had to go to SmackDown with wife Vega.

In an update, the Wrestling Observer Newsletter reports that the story on Fox and Andrade is not the prime reason for the roster change, but it’s not untrue either. The move mainly had to do with Flair and Andrade being split up, whether they were unhappy or because it made the company look bad. WWE officials are reportedly trying to listen to the fans and not look like the bad guys these days. The company is reportedly doing more focus group work than ever before, in an attempt to try and identify why their ratings are down and why there has been a decline in live event business, and what will keep fans engaged with the product. Furthermore, it was noted that WWE officials are fully aware that there is a new wrestling war, presumably with AEW, and they don’t want to come across as the bad guy promotion, which could give the opposition the role of having wrestling fans rally behind them as something like a protest vote.

It’s worth noting that Fox has been airing promotional material for SmackDown’s arrival on October 4. Some of the material focused on Mysterio, Flair, John Cena and RAW & SmackDown Women’s Champion Becky Lynch, while other material focused on Cena, Mysterio, Flair and Roman Reigns. Mysterio being sent to RAW is an interesting move because he was a big TV draw for Hispanic homes several years back when SmackDown aired on the CW network, and one could assume that he would help draw these days on Fox.

Below is a screenshot from a SmackDown advertisement that aired during a Fox MLB game earlier this month, featuring Mysterio, Cena, Lynch and Flair. The ad, which also featured a video box with The New Day, was shown just a few minutes before SmackDown was to begin airing on the USA Network that night. WWE and Fox officials have confirmed that SmackDown will be featured across all Fox programming, from entertainment to sports. 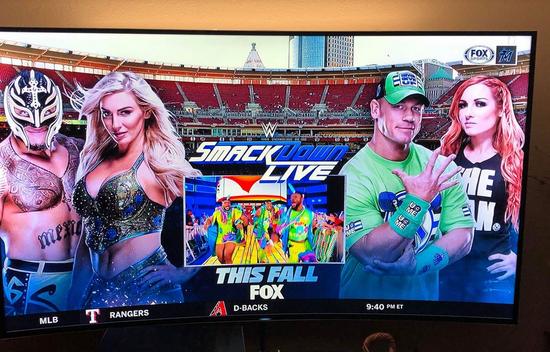