– Bully Ray briefly discussed the debuts of Lacey Evans and EC3 specifically on Busted Open Radio. He wasn’t satisfied with how it went down and said that it was two of the most underwhelming debuts ever.

“I hate to say this because I’m such a fan, but I don’t think I’ve ever seen more of an underwhelming way to debut somebody. I hate to say it, but [EC3] and Lacey Evans.”

– With Finn Balor replacing Braun Strowman against WWE Universal Champion Brock Lesnar at The Royal Rumble in under two weeks, WWE has finally released the offical poster for the event. The poster features Lesnar and Balor, along with various talents for the Rumble matches, as seen below: 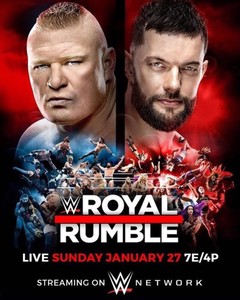