Seth Rollins was a guest on the Greg Atoms Show to talk about what he would do after he retires from wrestling, his match Survivor Series match with Shinsuke Nakamura, and his reactions about other wrestlers, like Alexa Bliss.

His match with Shinsuke Nakamura at Survivor Series:

“Yes, we had mingled a little bit in the Royal Rumble last year, but first time in a single match for sure. For me, you know I can’t speak for him, but for me a lot of respect, he’s someone who I’ve admired from afar. To be able to get into the ring with him, test myself against him, really get to find out how good I am. It’s a treat, he was an excellent opponent and I was glad that we got that first out of the way successfully.”

What he will do after he’s done with wrestling:

“I’ve already kind of got something going with my wrestling school back home in Iowa. I think once I get off the road and my in-ring career is done take probably at least take a few years off and relax a little bit. You know, but who knows I always like giving back to the business. It’s been my passion, like you said, my entire life. So it’s certainly something I feel like I’ll be involved in one way or another for as long as I can as long as I’m giving something and you know making progress, not just kind of stagnating.” 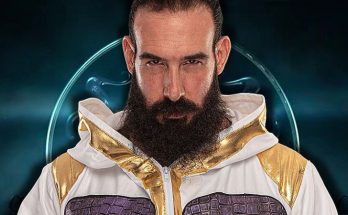