Kenny Omega spoke with New Japan Pro Wrestling about Hiroshi Tanahashi (who currently holds the Toko Dome title opportunity from winning this year’s G1 Climax) and what type of match should represent NJPW. Here are some of the highlights:

How he’s used in NJPW compared to Hiroshi Tanahashi:

“The thing is, I know that New Japan at that time, they don’t want to have to use me as their main event star, as their number one of course they don’t, look at the way they pushed Tanahashi. They still call that old f—er, ‘The Ace.’ He’ll still appear on TV, he has a movie in Japan, it’s embarrassing. Absolutely f—— embarrassing. But they do understand, hey guess what this is a business, we need money and the American fans aren’t stupid. They understand what a good match is. They understand who is able to give the best matches.

“I’m not here to cash in checks, I’m not here for money, I’m not here to do the classic style and the way wrestling is supposed to be. I’m the greatest f—— showman, I’m the greatest showman in professional wrestling, maybe of all f—— time, so they have no choice but to put me in the main event they don’t give a f— about me, I know they don’t give a f— about me as a person, and I know. There was one match where I wasn’t the main event, but I still remember that match I had before, in the semi versus Michael Elgin, that was still the best bout and guess what even if I’m not the main event, I’m still gonna have the best bout because no one here comes close to what I can do.”

During his tag match with Kota Ibushi against The Young Bucks at Walter Pyramid, fans chanted “New Japan.” Since then, Tanahashi and KUSHIDA have said they felt that type of match is not what NJPW represents. Omega gave his response to that:

“Here’s the thing, Tanahashi has this idea that wrestling has to be a certain way. There are borders that you shouldn’t cross. Wrestling should be wrestling, there’s a ‘classic’ way. But the thing is when I watch a Tanahashi match, I feel nothing. When I show a Tanahashi match to my friends, to my father to my fans; they are f—— bored. But when I show some of my matches, they feel something in their hearts, it makes them think about something. When a Tanahashi match ends, you’ve already f—— forgotten it. I wanted matches that stay with me forever, more than 24 hours, more than one week. Why they f— do you think they call me the best bout machine?!

“It’s not because I’m the greatest athlete in wrestling. Because I can create emotion and I can create a memory and because Tanahashi could never f——- do that. Really Tanahashi belongs in the WWE. He can be the next Roman Reigns. So, don’t think for a second that’s New Japan style. What Tanahashi should do is f—— thank me because you actually think a Tanahashi main event could ever go to America? You never could. You can go to America once, because it’s an interesting name, its’s a novelty for New Japan to come to America. Do you think if you put Tanahashi and Billy Gunn as a main event do you think he could ever come back? Of course not. So, with this worldwide movement, with the boost in numbers for New Japan World, somebody should tell this a–hole to think about business.” 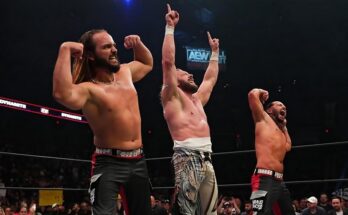