– WWE has a new poll asking fans which team has a better chance of defeating SmackDown Tag Team Champions The Bludgeon Brothers at SummerSlam.

– Big Cass’ first independent appearance has been announced. He will be appearing at Big Time Wrestling’s upcoming event on Friday, September 21st at the Spartanburg Memorial Auditorium in Spartanburg, SC. Cass is being advertised as “Big Cazz.”

Cass was released on June 20, 2018, so his 90-day non-compete expires days before the appearance. Emma, “Hacksaw” Jim Duggan, Meng, The Barbarian, Tommy Dreamer, James Ellsworth and WWE Hall of Famer Mick Foley are also advertised for the show.

You can check out a poster for the event below: 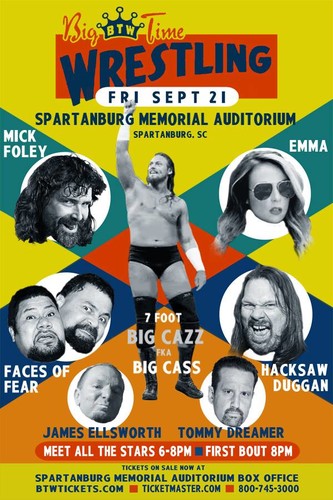 – Roman Reigns isn’t worried about the crowd reactions at SummerSlam. He tweeted the following today as he prepares to face WWE Universal Champion Brock Lesnar on August 19 in Brooklyn at the Barclays Center:

Whenever I’m in the ring, I hear the noise.
It doesn’t shake me.
It doesn’t anger me.
I don’t run from the noise. I thrive in it. I hope Brooklyn’s ready to get loud because I’m ready to give them a show.
And take the #UniversalTitle. #SummerSlam