– Below is backstage video of The Revival talking to Mike Rome after their win over Bray Wyatt and Matt Hardy on last night’s WWE RAW.

Scott Dawson goes on about how they are the best and most deserving tag team on RAW, and how there aren’t a group of guys that can walk down their block. Dash Wilder says they have avenged their losses to The Deleters of Worlds and they now have defeated Roman Reigns, Bobby Lashley, Hardy, Wyatt, Jeff Hardy, The New Day and others.

“We are without a doubt, hands down, scientifically proven, the greatest tag team walking planet Earth today. We told you this before and you guys always wanted to come to us and ask us [about our losses] but now you come to us and you respect us,” Wilder said.

WWE and 2K issued the following today on the new Tower mode for the WWE 2K19 video game that comes out in October:

Debuting in WWE 2K19 is a new feature called Towers. In this new mode, players choose WWE Superstars or their MyPLAYERs to compete against a string of WWE Superstar opponents. Each Tower features its own unique theme and is populated by a roster of WWE Superstars across a variety of challenging matches, including different win conditions and fun stipulations.

Opponents
Expect to battle dozens of opponents across the entire WWE roster, from NXT Superstars to current champions … and let’s not forget about the WWE Legends!

Tower Types
There are two types of Towers in WWE 2K19 that play differently from one another:

* Gauntlet – In a Gauntlet Tower, players need to complete the Gauntlet entirely in one session. Quitting early or losing a match resets progress back to zero;
* Steps – In a Steps Tower, players climb their way through a Tower – one match at a time and at their own pace.

Tower Goals
Some Towers feature their own set of goals, including such challenges as reaching a specific score and simply reaching the end of tower.

Stipulations
Some matches add an extra layer of depth in the form of Player and Opponent Buffs. A few examples include starting a match with a finisher or an event starting with health in the red.

Match Types
Towers Mode features many different match types. While there are plenty of normal one-on-one matches, there can be plenty of surprises from match to match. Here are a few match types that players will come across: Steel Cage, Table, Submission, Iron Man, Falls Count Anywhere and more!

2K Towers
In 2K Towers, players choose a WWE Superstar to compete against a wide range of WWE Superstar opponents across a number challenging Towers. Each Tower has a unique theme focused on showcasing the Roster it includes or pays homage to a specific Match Type. 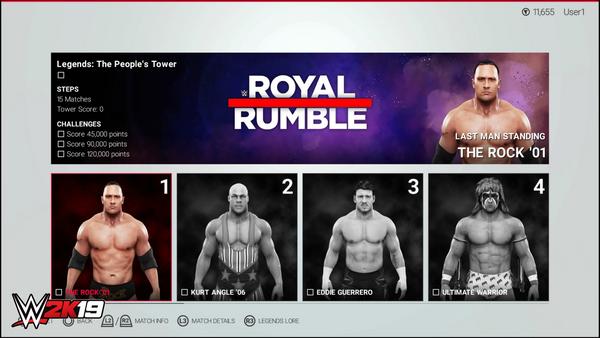 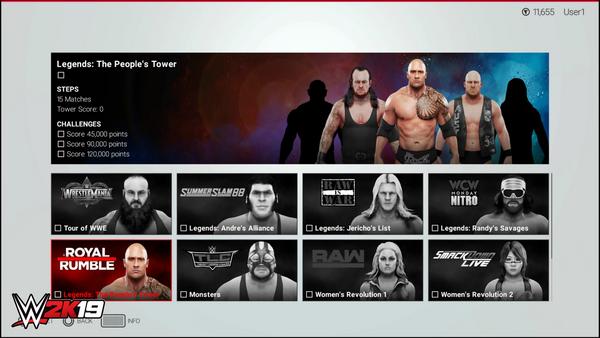 Legends Lore
Exclusive to 2K Towers, Legends Lore is a feature that highlights the history and accomplishments of all the undeniable WWE Legends featured in WWE 2K19.

AJ Styles Million Dollar Tower
“The Phenomenal One” is featured in his own high profile Tower called the AJ Styles Million Dollar Tower. This Tower is not for the weak of heart and will take extra determination and willpower to conquer it in full. Not only are the opponents in this Tower a collection of some of WWE’s finest, but they are also set at higher difficulties. Finally, a player’s health does not regenerate in between matches. Those who persevere and manage to make it through this gauntlet will be rewarded handsomely.

Fans in participating countries will have an opportunity to win one million dollars by defeating AJ Styles in WWE 2K19 through a one-on-one match. Participation in the WWE 2K19 Million Dollar Challenge is a simple, three-step process:

* Step One: Beat the AJ Styles Million Dollar Tower in WWE 2K19 while playing the game on either PlayStation 4 or Xbox One;
* Step Two: Record yourself cutting a promo video on why you have what it takes to beat AJ Styles in WWE 2K19. The video must include visual proof of the completed AJ Styles Million Dollar Tower screen to confirm you earned the in-game achievement;
* Step Three: Visit 2k.com/milliondollarchallenge to submit your promo video!

Four finalists will be selected and flown to WrestleMania 35 weekend, where they will compete against one another in a WWE 2K19 mini-tournament. The winner of that tournament will then face AJ Styles one-on-one in the grand finale for a shot at one million dollars! 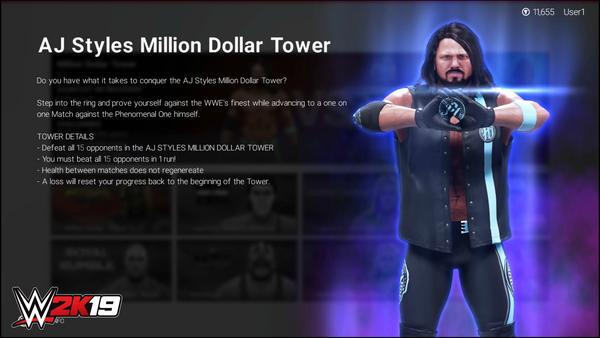 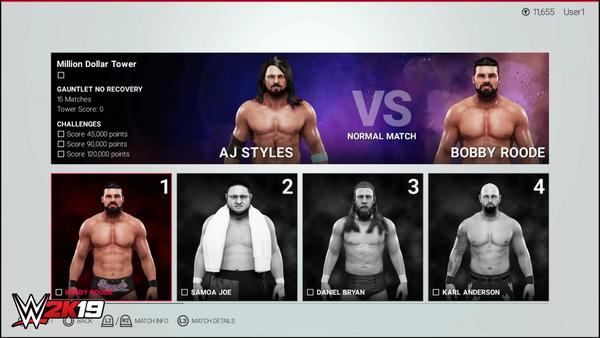 MyPLAYER Tower
In MyPLAYER Towers, players will use their MyPLAYERs to battle through Towers crafted to challenge both new and experienced players:

* In addition to set of permanent Towers, players will find unique Daily, Weekly and even PPV-based Towers;
* Every single day, a new Tower will appear for players to take on, while every week, there will be a new weekly Tower that is a bit longer than the Daily Tower, so be sure to start early;
* Stars earned from these Towers count toward all PPV event and Road to Glory qualifications, so it’s a good idea to tackle these as often as possible;

Finally, PPV Towers are active alongside WWE’s PPV schedule. To qualify for these Towers, players will need to meet a specific star requirement. Completing PPV Towers will unlock exclusive Superstar Parts for MyPLAYERs. 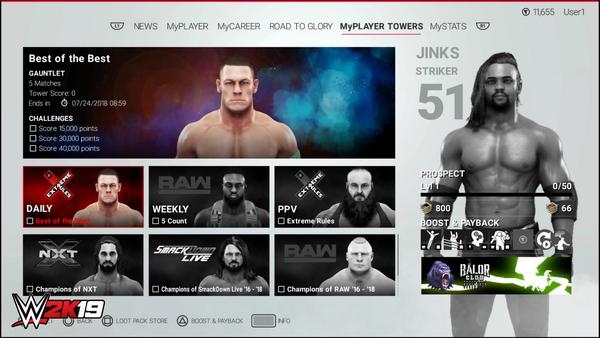 AEW Reveals The Meaning of FTR