– NXT Superstar Buddy Murphy made his WWE 205 Live debut on tonight’s show and defeated Ariya Daivari in a first round match in the WWE Cruiserweight Title tournament. The first round then wrapped with Mustafa Ali defeating Jack Gallagher in the main event.

The tournament brackets were revealed tonight and they look like this: 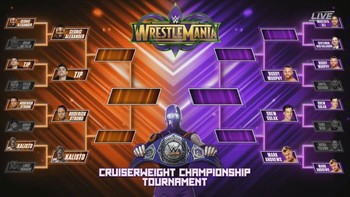