* NXT Women’s Title Qualifier: Ember Moon defeated Ruby Riot & Sonya Deville to advance to “Takeover: Houston” in the Fatal 4 Way with Kairi Sane and Peyton Royce. Pretty uneventful to start. Ember goes for a springboard but gets speared out of the air by Sonya.
Ruby and Sonya go at it. Ruby goes for a suicide dive, but Sonya cuts her off with a forearm. Sonya and Ember brawl on the floor, and Ruby hits a cross body off the top onto both of them. Ruby is selling a bad ankle (not selling, actually injured). Sonya locks in an ankle lock. Ruby gets to the ropes but Sonya doesn’t break, drags her back to the center and locks it in again. Ember hits the eclipse on Sonya while she has the ankle lock on and picks up the win

* Aleister Black defeated Raul Mendoza. As the match starts, Velveteen Dream appears at ringside and puts Aleister’s vest on. Mendoza gets a nice flurry of offense in including a corkscrew suicide dive. Aleister snaps and unloads on Mendoza and hits Black Mass for the win. Velveteen starts to leave with the vest then drops it and leaves, all while Aleister remains unfazed in his seated position in the ring

* Kassius Ohno defeated Cezar Bononi. Bononi actually got a decent amount of offense in on this one. Kassius hits a through the middle rope dropkick and lands on his feet. Quick match, Ohno picks up the win

* SAnitY defeated The Undisputed Era via disqualification in six-man action. SAnitY dominates the early going, working over both Fish and O’Reilly. Cole drops off the apron each time someone comes over for a tag. Young grabs Cole but Fish kicks him and knocks him out of the ring. O’Reilly lays in kicks and rags in Cole, who stomps on EY then tags out to Fish. Cole back in and goes to work on EY. Cole locks in a headlock. The Undisputed Era isolate Young and keep tagging in and out. Kyle goes for a corner splash, but Young moves. Kyle tags in Fish who stops Young from making the tag. Young gets the hot tag to Killian Dain. Dain hits a senton to Fish while dropkicking Kyle. Dain manhandles reDRagon as Cole looks on. Cole superkicks Dain to break up a pin. SAnitY takes out reDRagon and sets their sights on Cole. Cole gets cornered and Dain drags him into the ring. They set Cole up for a triple team when The Authors of Pain’s music hits. AoP attack for the DQ. Young goes for a suicide dive and splats the ramp. AoP take out Dain, then hit the Super Collider on Young & Wolfe. Undisputed Era look on from the ramp as AoP pose with the belts to end the show 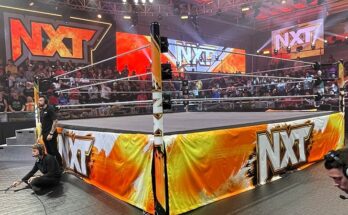 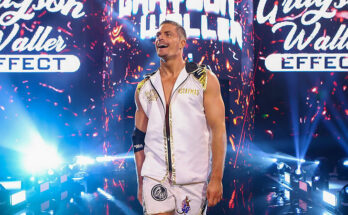