In a time when cross-promotional bouts seem to be the hot topic, it seems that nothing is outside the realm of possibility. Conor McGregor vs. Floyd Mayweather was an enormous commercial success despite the Irishman’s lack of credentials for the contest, but when there are huge sums on the line, anything can happen.

WWE Universal champion and former UFC heavyweight champion Brock Lesnar has gone from professional wrestling to mixed martial arts and back again successfully, showing his prowess in both codes. His popularity has only been strengthened because of it, and his ratings are big across both. 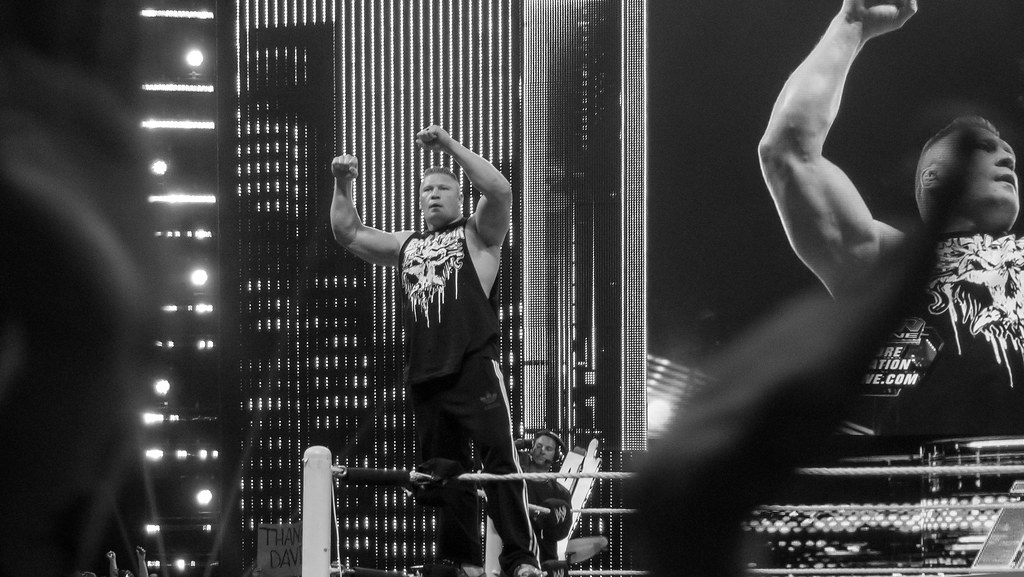 “Brock Lesnar at Raw, Miami, 2 April 2012” (CC BY 2.0) by interbeat
It makes him an obvious target for a lucrative matchup, and he’s used to being pursued by other MMA fighters. However, he has found himself in the crosshairs of WBC heavyweight champion, Deontay ‘The Bronze Bomber’ Wilder, who has suggested he could take to the cage against the wrestler.

“I’ll go to the Octagon with him, why wouldn’t I?” offered Wilder on a potential matchup.

There are a couple of sticking points here, however. Lesnar had retired from the sport for the second time back in February in the midst of a USADA ban stemming from his last bout with Mark Hunt in July of 2016. He hadn’t signalled any intention to return, and is riding high in the WWE. His doping violation ban ended in July so he would be eligible so if he was tempted then it would be a possibility.

The second element is Wilder’s current agenda in the boxing world. He has a title fight against Cuba’s Luis Ortiz on November 4, and the latest boxing odds have him a 4/6 frontrunner to retain his title in New York. Should the undefeated pugilist move on to 39-0, then is a potential big-money bout with Anthony Joshua on the cards.

That would make it less likely that he’d divert his attention away from the ring to concentrate on the cage, especially against an opponent who would require of him a diverse skillset to have any chance.

Lesnar’s reach is massive and it’s easy to call out a man who has shown no intention of fighting to bump up your own popularity, so it could all be hot air from the boxer.

Another foray outside of the WWE might see Lesnar lose much of the momentum he has regained since stepping back into the squared circle. This is compounded by the fact that Lesnar has talked about making “smarter decisions” for his health and wealth moving forward.

So, while it is an interesting prospect in theory, the actual likelihood of any such altercation is extremely slim. Wilder is cashing in on the hot topic, whilst Lesnar is likely completely uninterested in helping anybody else’s star shine brighter through his own name.

Wilder needs to remain focused on the tasks at hand and cementing his legacy in boxing, leaving the ‘old caveman’ to his wrestling career.

Tips For Wrestling Betting: How To Increase Your Chances Of Winning

Can You Bet On Wrestling From Canada?

How To Make the Most of WWE Devotion Online