– WWE announced 16,119 fans at the TD Garden in Boston for tonight’s Hell In a Cell pay-per-view.

– As seen on last Tuesday’s WWE SmackDown, Randy Orton teased that he was joining The Wyatt Family with a “can’t beat them, join them” mentality.

The storyline between Orton and The Wyatts continued at Monday’s WWE live event in Allentown, PA as Bray Wyatt helped Orton defeat Kane in a Street Fight by providing a distraction. Wyatt and Luke Harper then joined Orton in doing his signature pose on the turnbuckles, as seen below: 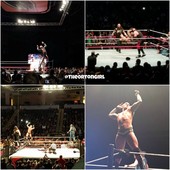