– Take a look at these hot new busty pics of Maryse: 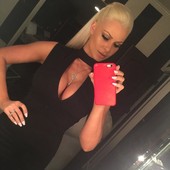 This is just a preview, join our partner site womens-wrestling.com for more pics. CLICK HERE!