As noted, WWE World Heavyweight Champion Triple H is scheduled to wrestle at the March 25th WWE live event from Madison Square Garden, teaming with Sheamus to face Dean Ambrose and Roman Reigns.
It looks like he may be wrestling before that, at the March 12th “March to WrestleMania: Live from Toronto” WWE Network special.

WWE’s website posted an article and graphic earlier today that stated Triple H will be defending that night. The article, which was not linked from social media or the main page, also did not mention an opponent and was quickly pulled once fans realized it was online. It appears the announcement was just made early.

Below is how the announcement read and a screenshot of the graphic:

The Road to WrestleMania is heating up, but on March 12, an event will take place on WWE Network that could completely alter the landscape of The Show of Shows. “WWE March to WrestleMania,” LIVE at 8pm ET/5pm PT.

Just three weeks shy of WrestleMania, WWE World Heavyweight Champion Triple H will defend his illustrious prize for the first time since capturing it at the Royal Rumble. Plus Brock Lesnar, Bray Wyatt, WWE Tag Team Champions The New Day, Sheamus, King Barrett and many more of your favorite WWE Superstars will be scheduled for action. 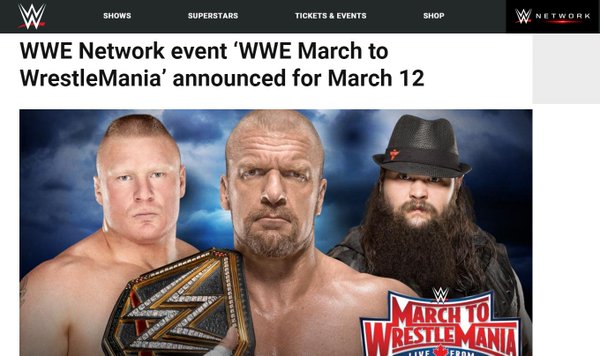